Peter Kinley (1926-1988) was born in Vienna and came to Britain as a refugee in 1938. He served in the British Army before studying at the Dusseldorf Academy and then at St. Martin's school of Art. He taught at St.Martin's and at Wimbledon school of Art before becoming Principal Lecturer at Bath School of Art in 1975. He exhibited in Britain and abroad and is represented in many British and international public collections. Kinley's works from the 1950s were often made using a palette knife and show the inflence of Nicholas de Stael. His later paintings were simplified, colourful, and schematic with subjects reduced to their fundamental shapes - they reflect his visits to India in the 1970s and '80s, and his admiration of Henri Matisse. He said that he tried 'to make paintings that are strong enough to remain in the memory as coherent images even after a brief encounter'. 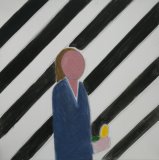 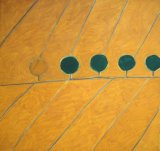