The artist and writer René Halkett (1900-83) was born in Germany. From an aristocratic family, he was a soldier in the First World War. He later joined the Stagecraft Workshop of the Staatliches Bauhaus Weimar in 1923 and studied under Klee and Kandinsky. He travelled in Java in the 1920s and spent time in Ibiza in the early 1930s. Escaping the rise of Fascism in the 1930s, Halkett chose exile in Britain, emigrating in 1936.

In his book Dear Monster, published in 1939, Halkett wrote about German society, the growth of National Socialism in Germany, and the threat of the outbreak of war. He was actively anti-Nazi and during the Second World War he was involved in the Special Operations Executive of the British military. After the war, he became a British citizen in 1946, and worked as a translator for the US Army during the Nuremberg Trials.

Halkett had exhibited paintings inspired by Surrealism at Jack Bilbo's The Modern Art Gallery in London in the 1940s. When Halkett later settled in Cornwall, he broadcast for the German Service of the BBC. He continued to produce paintings, drawings and sculpture, and became a mentor to young actors and musicians around Cornwall's Footsbarn Theatre in the 1970s.

A retrospective exhibition, René Halkett: From Bauhaus to Cornwall, was held at Falmouth Art gallery in 2019. 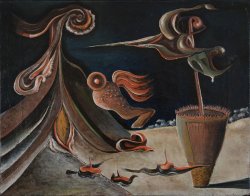 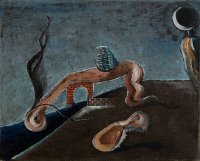