Hannah O’Shea trained as a sculptor at Goldsmiths in the 1960s, later exhibiting and teaching under her middle name, Mary. In the 1970s, when she was studying at the Slade, she began to work in time-based media and performance. O’Shea was an active feminist and was one of the founder members of the Women Artists’ Collective. In 1976-77 O’Shea made the iconic durational performance, A Litany for Women Artists, where she chanted the names of women artists in an action to reclaim them for history. Her works often display an ironic nod towards Christian iconography and religious rites, pointing at the role of women in everyday personal and professional life. Her Super-8 film and live art work, A Visual Time-Span (A Visual Diary) 1974-77, is a collage of performances mixed with women’s and gay rights demonstrations. 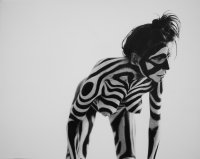