Audrey Cruddas (1912-1979) was a British artist and eminent theatre designer. Born in Johannesburg, she moved to England as a child, and later studied at the Royal Academy Schools and at the Byam Shaw School of Art. After serving in the Women's Land Army during the Second World War, Cruddas began to design costumes for the theatre. She often worked with the dancer and choreographer, Sir Robert Helpmann, and on productions for theatres in London and Stratford-on-Avon.  In 1953, she illustrated a Folio Society edition of Shakespeare's The Tragedy of Antony and Cleopatra. Cruddas moved to the village of Great Bardfield in Essex in the early 1950s, becoming part of the local artistic community, who included the artists Michael Rothenstein and Edward Bawden. Cruddas often exhibited with the Great Bardfield artists, and during the War years she had a solo exhibition at Jack Bilbo's The Modern Art Gallery in London. In 1990, works by Cruddas were included in the England & Co exhibition Jack Bilbo & The Moderns: The Modern Art Gallery 1941-48. Cruddas is represented in the collections of The Victoria and Albert Museum (Theatre and Performance Collections) and in the Fry Gallery in Saffron Walden.

Drawings & works on paper
ALL 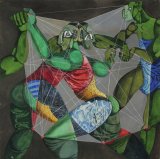