Michael Buhler(1940-2009) was born in London and studied painting at the Royal College of Art. His box constructions reflect his fascination with UFOs and combine the everyday with the paranormal and extra-terrestrial. He has exhibited widely and is represented in many public collections, including the British Museum and the Arts Council of Great Britain.

His paintings from the 1960s and 1970s reflect his fascination with the graphic communications and signage for motorways and packaging of the era, his interest in the simplified formalism of Leger's paintings of the 1920s, and his admiration for the work of his friend and fellow artist Patrick Caulfield. Works by Michael Buhler were included in the England & Co exhibitions Is there anybody out there? (2008) and City X (2009). 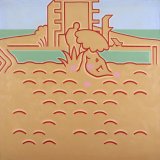