Farouq (Shaun) Molloy was born in Plymouth in 1957. He started making densly and mesmerically patterned drawings while working as a night-shift telephone operator in a London hospital. In the late 1980s, an art-historian neighbour introduced his work to England & Co and to the Outsider Collection and Archive. His work has since been exhibited in Great Britain and at the Irish Museum of Modern Art and was included in the 2001 exhibition Obsessive Visions: Art Outside the Mainstream at England & Co. In 2008, he was one of the artists chosen for the major exhibition of British Outsider Art at Musée La Halle Saint Pierre in Paris. 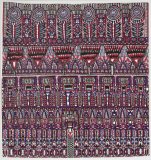