Remembered by Sir Anthony Caro as 'one of the most forward-looking and inventive artists working in England at that time', the British sculptor Peter King was just twenty-nine when he died in 1957. His work is only now being rediscovered and incorporated into the history of British art of the 1950s.

King produced a prodigious amount of work in his brief lifetime, but much had already been sold and the remainder packed away or lost after his untimely death. His reputation was neglected and he was largely forgotten: however, over the past few years, Peter King's work has re-emerged, a process aided by recent rediscoveries of missing works, diaries, scrapbooks and photographic records. King's work was obviously still evolving when he died, but he had worked intensely for more than a decade and absorbed influences from a wide range of sources. His techniques were diverse and  his materials included wood, bronze, lead, cement, aluminium and silver. He often used the lost-wax method of casting, a technique that goes back to antiquity. King also produced a large number of drawings, monotypes and gouaches and made an animated film, The Thirteen Cantos of Hell, which will be screened during this exhibition.

King studied at Wimbledon School of Art in the late 1940s, and around 1951 he moved to live in an artists' commune, the Abbey Art Centre in North London. He worked for Guidici, a firm of monumental stonemasons and as an assistant to Sir Charles Wheeler. Along with Anthony Caro, King was taken on by Henry Moore as an assistant, and his first commission for Moore was a large stone carving for the Time Life building in Bond Street. Through his employment with Moore he came to know many of the significant sculptors of the era, and from 1953 he taught part-time at St Martin's School of Art. He had three solo exhibitions at Victor Musgrave's avant-garde Gallery One in Soho and had works purchased by the Arts Council and Contemporary Arts Society of Great Britain as well as private collectors. He later received a Boise scholarship which led to his exhibiting in Paris and Rome.

Once described as an 'action sculptor' in reference to the thrown molten metal technique he used towards the end of his life, King had strong affinities with his friend the painter Alan Davie. Davie, sometimes referred to as an 'action painter', also lived and worked at the Abbey Arts centre, and he and King had a common interest in primitive art and in the idea of the artist as a shamanic being. Margaret Garlake, writing recently about the work of Peter King, explains that his 'central theme was the human body. It appears, frenzied or still, as standing figures, mother-and-child groups, hybrid or masquerade figures; rendered in polished wood with fluid curves, in tough cement proclaiming its modernity and in the intricate chunky wood carvings that are King's signature pieces.' She describes him as '... a man of the early post-war years whose work is profoundly eloquent of that period's doubts, fears and concern with humanity.'

An illustrated catalogue is available. 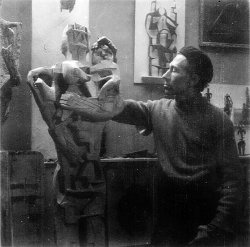