John Dugger was born in Los Angeles in 1948. He spent a year at the School of the Art Institute of Chicago before setting out for Europe in 1967. In London, he was part of the avant-garde group Exploding Galaxy in the late 1960s. He exhibited his artists' multiples, the Perennials, at the Whitechapel Gallery in 1970, and the tankas and ritual objects he collected during his travels in Nepal with fellow artist David Medalla were shown at the Hayward Gallery in 1971. In the early 1970s, Dugger began to work with cut-fabric appliqué banners, and organised collaborative/participatory projects such as People Weave a House in 1973. His earliest sculptures, what he called 'ergonic' or energy constructions, were first shown at the Museum of Modern Art in Oxford and Documenta 5 in Kassel, Germany, where he designed a pavilion dedicated to participation art.

Dugger travelled widely during this time, visiting China during the Cultural Revolution and he lived in Asia, Paris and London.  A theme that has concerned him for several decades since then is what he describes as 'the participatory relation of activity and the senses', as seen in his Sports Banners of the 1970s and '80s. His banners have been commissioned by numerous institutions and organizations, including the Arts Council of Great Britain, the House of Commons, the Gulbenkian Foundation, and Tate, London.

The Mountain Banners series began in 1985, when Dugger first transferred a mountain drawing he had made on the spot to a black canvas that became the central image of a banner. These works are inspired by Dugger's passion for mountaineering and by the Western Alpinist tradition of expeditionary drawing.

The banners that Dugger exhibited at England & Co in November 2007 were the results of his expeditions to the Himalayas and the San Juan Mountains and Grand Teton in the American Rockies. These works are drawn on site - often at altitudes of several thousand feet - and are later completed with fabric frames and hung with his own Soft-Rig tie system. Dugger describes these works as 'Futuristic Mountainism' and sees them as celebrations of the common ground shared by artist and mountaineer. 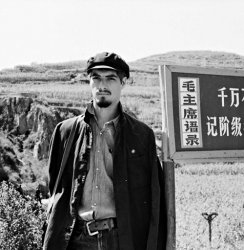 The artist in China during the Cultural Revolution,
photographed by Peter Fisher in 1972.